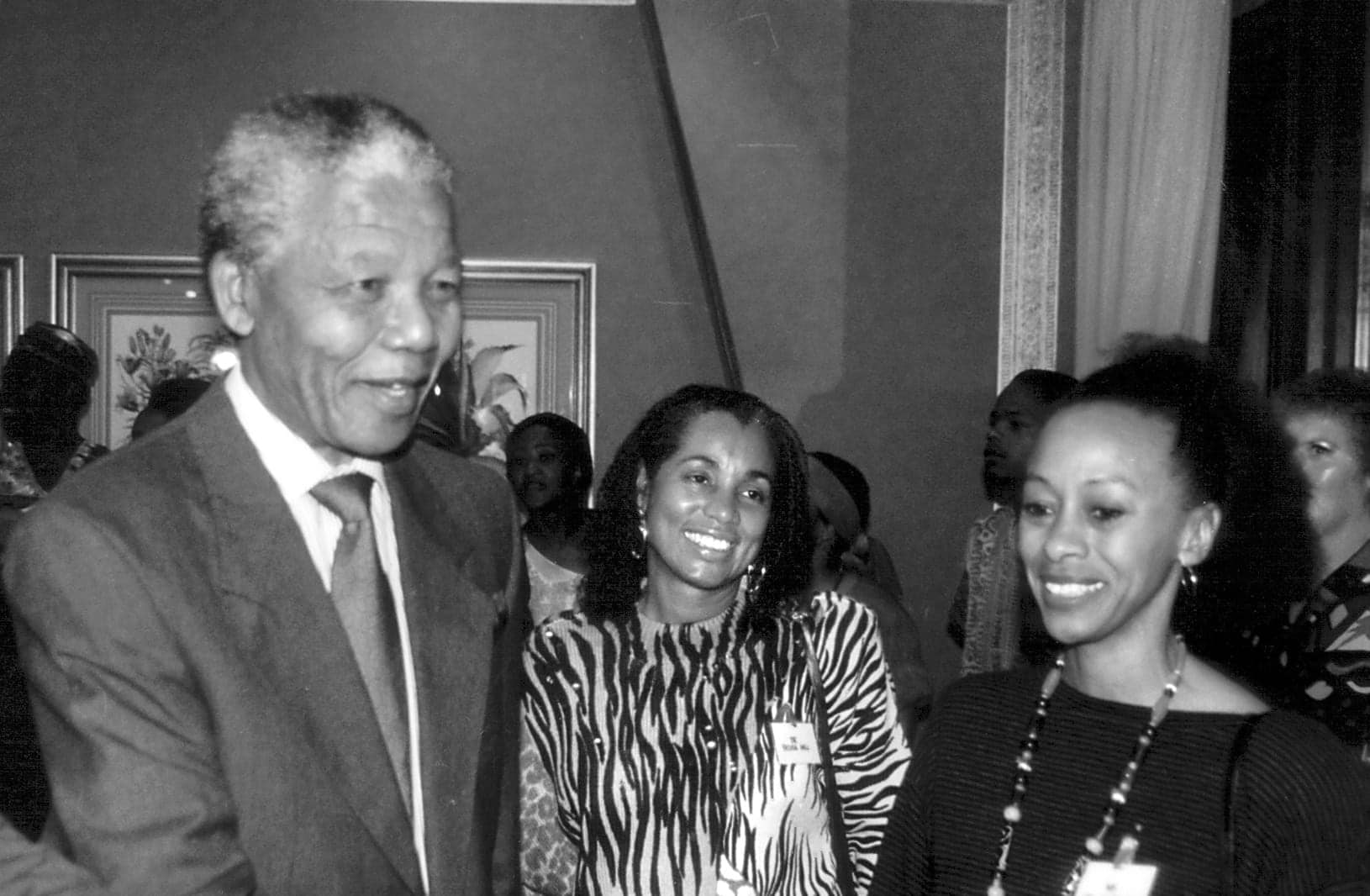 We had spent years organizing and participating in boycotts, legislative advocacy, divestment campaigns, material aid campaigns for the armed struggle of the African National Congress liberation movement and southern African refugees, and marches to the chant “Free Mandela”!

Then, on February 11, 1990, Nelson Mandela walked to freedom after 27 years of imprisonment.

I cheered and cried with my comrades Cecelie Counts and Sandra Hill of the Free South Africa Movement as we watched the early morning television coverage of Mandela’s “freedom walk” away from prison and into crowds of jubilant South African supporters. This moment was the victory of the worldwide struggle to support the people of South Africa in their quest to dismantle apartheid.

By the early spring of 1990, journalist-activist Roger Wilkins phoned me to see if I would be willing to work with him and Harry Belafonte to organize the historic visit of Nelson Mandela to the United States. The visit was to take place in June 1990—just a few short months away. Roger explained that Harry Belafonte had phoned him to say that the African National Congress’ (ANC) chief representative to the United States, Lindiwe Mabuza, had been asked by Oliver Tambo, president of the ANC, to request that Harry lead the effort to craft the itinerary of the visit.

Belafonte said he immediately thought of Roger since he had worked with the steering committee of the Free South Africa Movement (FSAM) campaign of civil disobedience at the South Africa Embassy in Washington, D.C. Roger said he immediately decided that he needed both Cecelie Counts and me to become the Associate Directors to assist him with organizing an eight-city visit to the United States!

We advised Roger to hire Joanne Favors as his administrative assistant. She had worked with me organizing the North American delegation to the Sixth Pan-African Congress in 1974. As he began assembling his team, Roger happened to encounter Michael Jackson, a congressional staffer working in Senator Ted Kennedy’s office. Jackson advised us to treat Mandela’s visit like a presidential campaign. He suggested that we hire Reta Lewis, Esq., who had considerable presidential campaign experience. This advice was critical to the success of this historic visit because it greatly reduced our trial-and-error learning. Reta immediately identified the organizing infrastructure we would need nationally and identified the experienced advance people and number crunchers we would need to make sure that there would be local press and crowds of people to greet the delegation in each city.

Both Roger Wilkins and Harry Belafonte were key leadership selections because they had friends and political connections that were essential to building our financial capacity to fund this historic visit. Aside from having to contract with an airline to provide travel and in-flight food services to eight cities, we would need funding for all of the expenses of the delegation as well as the organizing infrastructure. Both men proved to be very capable and artful in fundraising and negotiating the various political interests that emerged. Plus, they had the historical legacy and political stature that received return phone calls when they called!

As Harry observed in his seminal autobiography, My Song: A Memoir, “In those eleven days, I watched saints become devils and devils become saints.” 1Belafonte, Harry with Michael Shnayerson. My Song: A Memoir. New York: Alfred Knopf, 2011: 398. Everyone wanted personal time with Mandela, while we wanted to protect his health and safety as we crisscrossed the United States. Finally, we identified the tour cities: New York City; Boston, Mass.; Washington, D.C.; Atlanta, Ga.; an AFSCME labor convention near Miami, Fla.; Detroit, Mich.; and Los Angeles and Oakland, Calif. In each city, we tried to have local organizing committees hosted by the political leadership, women’s groups, youth groups, and labor unions as well as a large public gathering to hear and see Mr. Mandela, Mrs. Winnie Mandela, and the ANC delegation. In addition, we had to accommodate local, national, and international press.

As an organizing team, we were very conscious that this visit had to affirm Mr. Mandela’s political mandate to assume leadership in negotiations with the apartheid de Klerk regime. We wanted to do this by having large crowds of U.S. citizens display national admiration and support for Mr. Mandela, Winnie Mandela, and the African National Congress as a legitimate political force to assume State power. The ANC presented the following objectives for the trip:

Finally, after a stopover in Canada, the delegation arrived in New York on June 20. After a brief welcoming by New York political leadership, anti-apartheid groups, and union representatives, we left with the delegation. As we departed John F. Kennedy Airport on our way to the cities, crowds of people lined up along the sides and leaned out of their apartment buildings cheering, waving cloths and placards with welcoming signs, and holding their children up to get a glimpse of Mr. Mandela! I smiled and thought that the work of the crowd crunchers and the years of work of all the anti-apartheid organizations were very visible!

Once in New York City, the delegation’s first stop was to meet a youth group who were overjoyed to meet Mr. Mandela! Next, we held a press conference where Randall Robinson, president of TransAfrica and one the leaders of the Free South Africa Movement (FSAM), formally welcomed Mr. Mandela and the delegation.

Throughout the New York visit, the delegation met with church groups and political groups from Brooklyn to Manhattan! The ticker-tape parade was one of the largest gatherings of admirers from the Tri-State area that New York had ever witnessed!

As we moved across the nation, the crowds increased significantly, and public support for the political aims of the African National Congress grew more expressive!

In D.C., the local organizing committee consisted of Sandra Hill, Gaye McDougall, Esq., Karen Spellman, Acie Byrd, and a host of other foot soldiers who had worked with the Southern Africa Support Project (SASP), anti-apartheid groups, or Gaye’s mobilization of lawyers to challenge apartheid.

While in Washington, Mr. Mandela met with President George H.W. Bush and addressed a joint session of Congress. He also met with the Congressional Black Caucus members, other congressional allies, the FSAM steering committee, and TransAfrica’s board members and staff. In addition, he met with anti-apartheid activists and the local organizers of the major public event held on June 27, 1990, at the Washington Convention Center. It was hosted by Mayor Marion Barry and featured performances by a variety of musicians like Gil Scott Heron and others before the dynamic speech by Nelson Mandela. The event attracted over 32,000 supporters, who waited in long lines to welcome Nelson and Winnie Mandela.

One of Mr. Mandela’s special joys during his D.C. visit was his early morning walking exercises with the late Issac Fulwood (1940 – 2017), who was the second Black chief of the Washington Metropolitan Police Department (July 1989 – September 1992) and an advocate of policing in support of the exercise of First Amendment protest rights.

As Mr. Mandela’s advance person, I spent considerable time with him; I was impressed by his personal discipline, respect for time, congeniality, and political purpose throughout his trip. When Mr. Mandela, Winnie Mandela, and the delegation departed the U.S. on June 30, 1990, for Ireland, we knew as we shared hugs and goodbyes that a new phase of the struggle was beginning in what he often referred to as “the long walk to freedom.”

Dr. Sylvia Hill is an educator, co-chairperson of the Southern Africa Support Project, and leader of both the Free South Africa Movement and the Sixth Pan-African Congress.