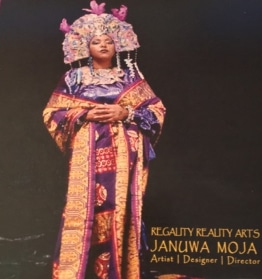 Januwa Moja’s creations explode in a profusion of color and style, making unique African cultural statements that underscore her love for and celebration of our heritage, our contributions and our possibilities. Moja uses a broad range of techniques and materials in her work, including hand-painted fabrics, appliqué, beading, feathers, collage, crochet, and off-loom weaving. Her own stylings of clothing, furniture, sculptural wall hangings, and more are a testament to her firm belief in the beauty and imagination of African people, her celebration of African American life and her continued intimacy with her community and the art world. Born in Baltimore, Md., she earned a BFA in Design and Fiber Arts from the Maryland Institute College of Art. She has been a cultural activist since 1968 and has lived and created in Washington, D.C. since 1979.

In the 60’s, Moja began creating African stylized fashion and at that time, she coined the phrase “wearable art” to describe her creations.  In 1977, Januwa was selected to exhibit her art at FESTAC (World Festival of Arts and Culture) in Lagos, Nigeria. 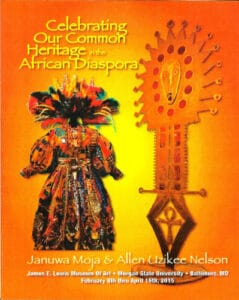 As a recipient of a D.C. Humanities grant in 1984, she traveled to Africa, Brazil, Europe, and the Caribbean. She represented the National Conference of Artists for five years as president of the Washington, D.C. chapter. Moja was a founding member of GABA (The Golden Age of Black Art, 1990 to 2010), an organization that dedicated its activities to “raising the values and voices of Black artists.”

Moja describes the 80’s and 90’s as some of her most exhilarating times as an artist. It was during those times that Moja raised the profile for designers of African descent by staging inspirational productions that included musicians, dancers, and poets. She titled these shows “Dreams, Mysteries,Visions” – a concept that she speaks of regularly as it pertains to her work. Dreams refers to the dreams of our ancestors; Mysteries, to the untold stories of our people; and Visions, to our perception of ourselves as cultural purveyors in the African world. 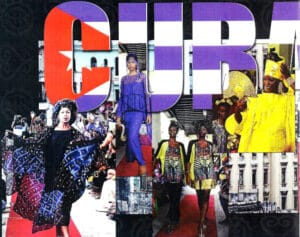 Januwa Moja attributes her cultural consciousness to the Black Power movement of the 1960’s. She has studied the works of our leading historians and our most esteemed black artists, and she has been inspired to use her gift in the arts as a great tool or weapon to inspire her people to embrace their culture and African selves. “The Struggle Continues.” 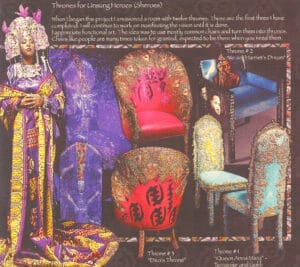 Januwa Moja is a textile artist and designer who has dedicated 47 years to celebrating the African diaspora through the creation of wearable art. Moja has designed performance wear for the a capella women’s group Sweet Honey in the Rock, and she also creates social and celebratory dress for clients in Washington, D.C. Moja’s work is in the permanent collection of the Smithsonian’s National Museum of African-American History and Culture.