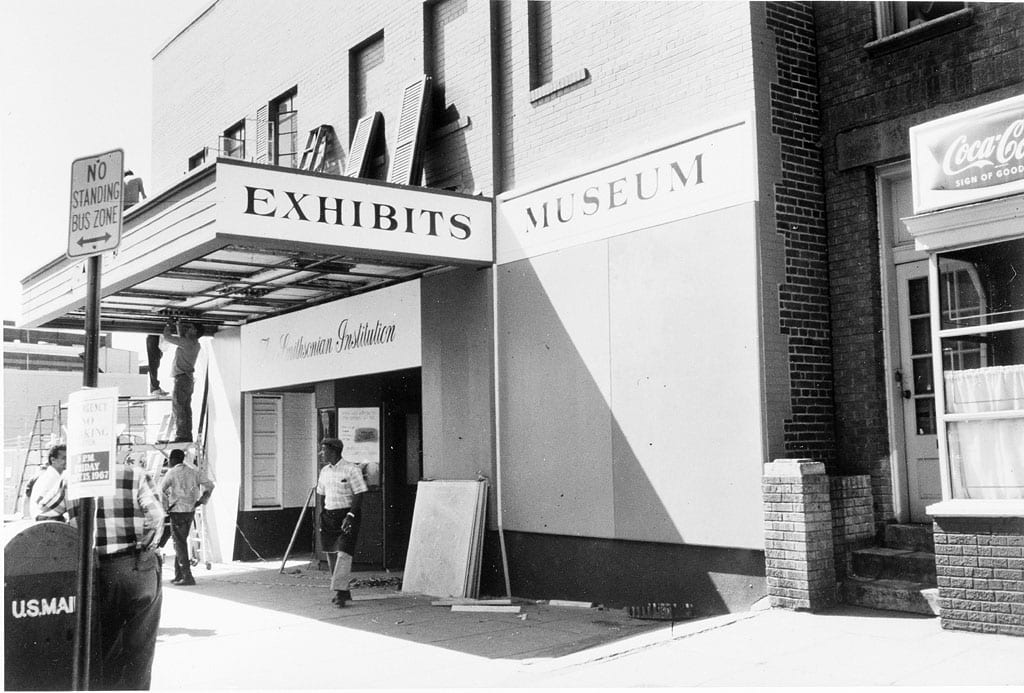 In September 1967, the Smithsonian Institution opened the Anacostia Neighborhood Museum (ANM) under the direction of community activist, organizer, and minister, John Robert Edward Kinard. A native Washingtonian, Kinard came to the Smithsonian with a deep commitment to his communities of residence, including Anacostia, and he had a long, extensive background of community service, both locally and internationally.

The Smithsonian’s initial conception of ANM was experimental outreach to an African American neighborhood, bringing some collections and programs to potential visitors who were not engaged by or interested in the museum buildings on the National Mall. Samir Meghelli, one of the museum’s later curators, provided additional context about the museum’s origins in a presentation to the American Historical Association:

“Opened in a former movie theatre in a working-class, African American neighborhood across the Anacostia River from downtown Washington, D.C., the museum began to transform traditional museum practices in ways that reflected the spirit of the Civil Rights and Black Power movements in which its staff and constituents were active participants.

“The Anacostia Neighborhood Museum’s founding director and several staff members had previously worked at the Southeast Neighborhood House, a longstanding settlement house that had been emboldened by—and came to national attention in the midst of—the tumult of the 1960’s. Reinvigorated by an infusion of War on Poverty funds, the Southeast Neighborhood House engaged in tremendously successful tenant and youth organizing, neighborhood improvement, and education advocacy. That experience laid the groundwork for the early staff of the Anacostia Neighborhood Museum, along with long-time neighborhood residents, to draw on organizing strategies and Black Power ideologies to envision and shape this community museum…” 1“Civil Rights, Black Power, and The Origins of the Smithsonian’s Anacostia Neighborhood Museum.” Samir Meghelli, Curator, Anacostia Community Museum, Smithsonian Institution. Presentation at the American Historical Association 132nd Annual Meeting, Washington D.C. January 4-7, 2018.

Rev. John Kinnard in his office at the Anacostia Neigborhood Museum. John Robert Edward Kinard (November 22, 1936 – August 5, 1989) was an American social activist, pastor, and museum director. He is best known as the director of the Anacostia Museum, a small community museum founded by the Smithsonian Institution in 1967. Kinard was the museum’s first director, and remained in the post until his death. The Washington Post said Kinard was “a passionate believer in the idea that the well-being of black people depends on having a record of their past”. Kinard was named director of the Anacostia Museum in July 1967. He held the position until his death in 1989.[1]
Under Kinard’s leadership, the Anacostia Museum had 35 major exhibitions in its first eight years. One of the early exhibitions, “Frederick Douglas, the Sage of Anacostia, 1817?-1895”, was chosen to tour the United States by the Smithsonian Institution Traveling Exhibit Service.[10] Kinard’s vision for the Anacostia Museum was that it could not be divorced from the problems of the neighborhood around it.[1] The exhibit “Lorton Reformatory: Beyond Time” highlighted the fact that many young African American men from the Southeast Washington were incarcerated at the prison, and documented their life there. Another exhibit, “The Rat: Man’s Invited Affliction”, looked at the way rats have taken advantage of human living conditions to thrive and spread. It identified ways in which people living in the Anacostia area could get rid of rats living in their homes. It also included live rats running through part of the exhibit.[10] The museum later curated major exhibits on the problems of crime, the illegal drug trade, poor housing conditions, and lack of quality education in African American communities.[11] Wikipedia

The ANM staff and the community-based Anacostia Neighborhood Advisory Committee assessed that the museums on the Mall did not represent Black people’s views or history. Therefore, the ANM had a responsibility to form an organic relationship with the community and address local needs, interests, problems, and aspirations. They defined two areas—urban problems and Black American history—and started with the former.

The Neighborhood Advisory Committee (which later became the Museum Advisory Board) chose not to get involved with ANM personnel and administrative issues; however, they did insist that ANM hire people from the community whenever possible and that the Committee be consulted for ideas and suggestions about programs and exhibits. In addition to Kinard, the founding staff of five included Esther Neighbert; Benjamin Davis, who left prior to the opening and was replaced by Blanca Fellows; James E. Mayo for new exhibits; and Zora Martin Felton, former assistant director of Southeast Neighborhood House, for education.

The first exhibits were an “eclectic mix of artifacts” suggested by and offered from Smithsonian Museums—a space capsule with a filmed shuttle take-off; a vintage country store from 1890; a small zoo with parrots, monkeys, fish, hamsters, gerbils, and snakes; a skeleton of the human body, which could be assembled and disassembled; and shoebox exhibits of sundry minerals, stones, and gems. Subsequent exhibitions proposed by ANM, the Museum Advisory Board, and local residents focused on their experiences and included “The Rat: Man’s Invited Affliction,” “Lorton Reformatory: Beyond Time,” “The Anacostia Story,” “The Frederick Douglass Years,” and “The Barnett-Aden Collection.”

According to John Kinard, “The Rat: Man’s Invited Affliction” addressed an urban problem, an Anacostia problem, and “probably put Anacostia on the map.” He recalled:

“While watching the gerbils and hamsters, some neighborhood children said, ‘We have rats, and we don’t need any more rats in our neighborhood.’ Oh my God, they got a horrendous story. I live in the neighborhood, too … but it never dawned on me … It was like a condition of living … babies getting bitten in cribs at night, keeping the lights on in the house … Zora researched the rat issue with the chief authority at the National Institutes of Health, and she took the children to his research facility in Poolesville, Maryland…” 2Oral History Interview with John R. Kinard, Director, Anacostia Museum. Conducted July 10, 1987 at Mr. Kinard’s Office in the Anacostia Museum by Anna M. Rogers, University of Maryland, for the Smithsonian Institution Archives Oral History Project.

The children educated the Advisory Committee, and they suggested an exhibit. Zora Martin Felton consulted the D.C. head of Rat Control and Extermination and identified seven public and private sectors that contributed to the rat problem. The exhibit included Felton’s research on the plagues in Europe, the quarantine of ships, rats on docks, rats in American storage bins, and rat control—proper clean up, trash cans, and storage.

“The response was overwhelming and positive,” stated Kinard. “ABC News did a film on the exhibit and called it, ‘Something New in Anacostia.’” 3Kinard oral history interview. The exhibit touched local and national government and impacted public policy on rat control funding for infested urban areas. Subsequent urban exhibits at ANM were on drugs, crime, education, and the community of Anacostia, based on The Anacostia Story, an ANM-commissioned book by Louise Daniel Hutchinson. The museum naturally shifted out of urban problems to avoid weighing down and demoralizing the community, expanding its focus to art, history, and culture.

The organizing strategies and ideologies of the Black Power Movement placed the Anacostia Neighborhood Museum squarely at the forefront of the new museum movement. ANM was dynamic and organic. The Museum Advisory Board was from the neighborhood. Staff positions were filled by community applicants when possible. Neighborhood issues and concerns were address collectively, residents were engaged and they participated, schools and community organizations were invited as partners, and volunteers were invited as experts. The museum pioneered hands-on children’s rooms, convened a youth advisory council, and started the Anacostia Historical Society, which collected older residents’ oral histories. Kinard explained that the Anacostia Neighborhood Museum model inspired a new concept: “Taking a geographical area, looking at the people and everything within it, and doing history, art, problems—something they’d never even thought of. Now guess what it’s called? The new museology.” 4Kinard oral history interview.

As noted on the museum’s website: “Throughout its storied history of more than fifty years, the museum has remained relevant, developing documentation projects, exhibitions, and programs which speak to the concerns, issues, and triumphs of communities, and which tell the stories of everyday people.”  5History.” Smithsonian Anacostia Community Museum website. http://anacostia.si.edu/About/History
* This narrative is broadly informed by S. Dillon Ripley, “Museums and the Future,” in The Sacred Grove: Essays on Museums. Washington, DC: Smithsonian Institution Press, 1978. 97-111.

Note: Much of this narrative’s content is summarized from a 1987 oral history interview with John R. Kinard, founding director of the Anacostia Museum, conducted by Anna Rogers. A full citation appears in the footnotes.

Niani Montgomery Kilkenny is the retired director of the Program in African American Culture at the National Museum of American History, Smithsonian Institution, and former public affairs director of 96.3 WHUR-FM.