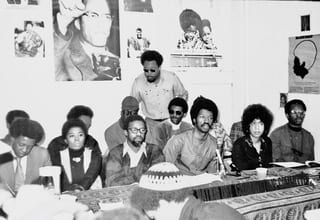 The first national observance of African Liberation Day in Washington, D.C. occurred in 1972, following a visit to the liberated zones of Mozambique by Malcolm X Liberation University director Owusu Sadaukai (Howard Fuller), African-American film director and cinematographer Robert Van Lierop (A Luta Continua), and SNCC veteran Bob Fletcher. In discussions with representatives of the FRELIMO liberation movement, Sadaukai observed firsthand the challenges of armed struggle and nation building in the liberated zones. FRELIMO representatives identified international solidarity as their most pressing need, both from allies in the Black community as an expression of Pan Africanism and from people of good will in the U.S.

After returning from Mozambique, Sadaukai circulated a letter from a national ad hoc group called the African Liberation Day Coordinating Committee (ALDCC), observing that the Organization of African Unity (OAU) had designated May 25th as a “Worldwide Day of Solidarity with the People of Africa” and urging that a day of solidarity be mobilized in Washington, D.C., Canada and throughout the Caribbean. The letter identified the following objectives:  ”1) help make the masses of African (black) people in the United States, Caribbean, and Canada aware of the political conditions in Southern Africa and the armed struggles being carried out by the brothers and sisters there;  2) to educate African (black) people in these countries about the relationship between what is happening to our people in Africa and what is happening to us in other places; 3) to organize a national protest demonstration against the United States foreign policy which supports European colonialist rule in Southern Africa.” The letter called for organizations and individuals to come to D.C. on May 27th or to organize a solidarity demonstration in their local area.  At the time, I was affiliated with the Institute for African Education in St. Paul, Minn. Once we received the letter, we decided to hold an African Liberation Day in St. Paul in solidarity with the national event and to continue raising political consciousness about the liberation struggles in southern Africa. I attended the African Liberation Day in Washington, D.C., to represent our organizing efforts in St. Paul.  The morning of May 27th was sunny and pulsating with excitement. Local master drummers filled the air with calls for brothers and sisters to gather for the demonstration in Malcolm X Park (Meridian Hill Park) on 16th Street N.W.  When people began streaming into the park early, seasoned organizers knew that the march was going to be flowing with the expected crowd of more than 10,000. Various organizers and African American reporters estimated the crowd to number anywhere from 30,000-40,000 by the time the marchers reached the National Mall, which had been unofficially renamed Lumumba Square. On the way to Lumumba Square, the marchers demonstrated at the Portuguese, Rhodesian (Zimbabwean), and South African embassies calling for the elimination of settler-colonialism and the end of U.S. foreign policy support for colonialism and apartheid. Rallies also took place in San Francisco, Calif., and Toronto, Canada, as well as in the Caribbean nations of Dominica, Antigua, and Grenada, with exhilarating participation from labor, political parties, and ordinary people in solidarity with the cause of African liberation. 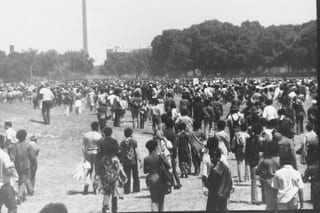 The arrival of participating organizations at Lumumba Square was particularly impressive. Various delegations had organized youth groups and organizational formations from their cities and states with banners and placards. For example, the Congress of African People (CAP) had youth groups from each of their chapters who marched dressed in green CAP sweatshirts. Other groups marched with signs declaring, “Africa for the Africans,” “We are an African People,” and “Black People Must Unify.” Once the speakers assembled, the crowd listened and chanted with the collective consciousness of the moment. There was an array of dynamic speakers including Congressmen Charles Diggs and Walter Fauntroy, Queen Mother Audley Moore, Ron Daniels, Dawolu Gene Locke, Rev. Doug Moore, Elaine Brown of the Black Panther Party, Haki Madhubuti, and Imamu Amiri Baraka. SNCC veteran Cleveland Sellers read a solidarity message from Kwame Ture (Stokely Carmichael) “urging African Americans to take a revolutionary posture towards colonialism and imperialism.” Ture called for “a black political party and the total liberation of Africa under scientific socialism.” The ending speech by Owusu Sadaukai was a rousing call to Pan Africanism and collective action in solidarity with the people of Africa and against U.S. support for colonialism. He closed with a resounding chant that the audience enthusiastically repeated: “We are an African people!”

In the months and years following that first African Liberation Day observance, there would be many important political efforts, organizing activities in both general society and the electoral arena, and significant victories that carried the struggle forward such as the African Liberation Support Committee, the All-African Peoples’ Revolutionary Party (AAPRP) annual mobilization of African Liberation Day events, and the Sixth Pan African Congress. Local groups like the Southern Africa Support Project (SASP) in D.C. that focused on grassroots organizing were the heartbeat of a growing movement in many communities. These ideas, actions, and people contributed to a deepening African heritage consciousness within the Black Power political framework and the growing militant and cultural expressions of African solidarity among people in the Diaspora.